Looking forward to a management team session today in which we’ll be discussing how to raise awareness with team members so we can have constructive forward moving conversations that build for the future. As opposed to ignoring the issue entirely or tackling the issue too flimsily or too firmly.

The framework below is from a brilliant booked called Radical Candor by Kim Scott and it helps you to create a vocabulary to have a conversation in which you can give guidance on a particular issue, gap or mannerism which provides sufficient challenge for the situation to be tacked head on at the same time as doing it in a non-threatening, helpful, caring way.

I like this approach and it’s similar to an acronym we use in ActionCOACH which is that, as your coach my role is not to be N.I.C.E. This stands for Nothing Inside Cares Enough.

If you are to become the person you want to be your coach can’t be allowed to go into ‘collusion’ with you. Perhaps indulge in sympathy for you and let you off the hook. Honesty (or candour as the book would say) has to be shared & done so from a place of care.

So when it comes to confronting what might be a potentially awkward conversation what’s your approach? Which of the boxes below is your default? 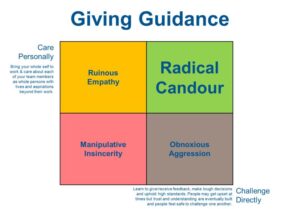