You’ve probably heard the acronymn of F.E.A.R standing for False Expectations Appearing Real. This is where we build something up in our minds that appears bigger, stronger, harder, uglier than it turns out to be.

We scare ourselves of it and then when we confront it we often say “that wasn’t half as bad as I thought it was going to be”. I see this all the time with clients who get through the initial fear & then are delighted that they conquered what they initially feared.

What about the other play on the acronymn? Failure Expected And Realised.

Have you ever gone in to something thinking “this won’t work”, “they won’t buy”, “I’m going to miss this shot” and you prove yourself right?!

We need to be careful what we think. Especially so when all around us are in fear. As a business owner your people are looking for confidence. For a solution focus. For a way forward.

There’s a psychological phenomenon called the Pygmalion effect which refers to situations where teacher expectancies of student performance become self-fulfilling prophecies. Students perform better or worse than other students based on the way their teacher expects them to perform.

So, what expectation are you setting for yourself? And for your team? 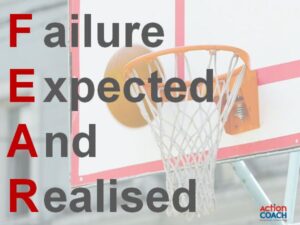